Carl-Erik was born in Helsinki on October 14, 1932. He studied psychology, history and pedagogy at the University of Helsinki, from where he also received his licenciate degree in psychology. In 1986 he presented his doctoral dissertation on the cross-cultural appplications of the Rorschach and obtained his doctorate from the University of Jyväskylä. In 1989 he obtained the title of Docent from the same University. Carl-Erik continued learning throughout his life and was the author of numerous articles in peer-reviewed journals, particularly in the field of personality and cognitive assessment in both clinical and non-clinical populations.

He began his career as a clinicial psychologist at the Ekåsen Psychiatric Hospital in 1957 and later moved on to work as a vocational guidance psychologist in Turku. In 1972 he started working for the Rehabilitation Research Centre of the Social Insurance Institution of Finland (Kela), first as a clinical psychologist, and, from 1974 to 1995, as a researcher. He retired in 1995 after having been in charge of the psychological assessment section of numerous national research projects.

Throughout his career, Carl-Erik carried-out suitability assessment for thousands of candidates applying for medical-educational and other institutions, and offered consultation and training in the fields of organizational psychology and vocational guidance. He served on the Test Board of the Finnish Psychological Association for two decades and taught assessment at the Åbo Academy, where he also supervised numerous doctoral dissertations.

Carl-Erik regularly attended Rorschach Workshops Alumni Comprehensive System (CS: Exner, 2003) training and, in 1993, became a certified CS trainer. This allowed him to start teaching the CS in Finland, at first in collaboration with the University of Jyväskylä, and later with Tuula Ilonen, Outi Kalla and Olli-Pekka Santala. A first group of Finnish psychologists graduated from Carl-Erik’s CS training in 1995. That same year, with a group of colleagues, he founded The Finnish Rorschach Association for the Comprehensive System – now The Finnish Rorschach Association (FRA). He served as President of the association for the first 10 years, after which he was nominated President honoris causa.

Carl-Erik regularly attended and made presentations at international conferences and conventions on personality assessment, particularly the Annual Convention of the Society for Personality Assessment (SPA) and congresses of the International Society of the Rorschach and Projective Methods (ISR), but also the now past European Rorschach Association for the Comprehensive System, for which he served as Vice President. This allowed him to build a broad international network of professional contacts and friends with other outstanding experts in the field, which he regularly invited to Finland to teach at FRA seminars, to the great benefit of psychologists working in Finland. In addition to the Rorschach, Carl-Erik was also known for his work with the Zulliger Test, as well as the Wartegg Drawing Completion Test, which he also taught. In 2009, the Society for Personality Assessment and SPA Board of Trustees officially recognized Carl-Erik for his outstanding contribution to personality assessment.

After retiring, Carl-Erik continued to work as a teacher, a consultant and a supervisor of scientific research for many years. He lived for 14 years in Stockholm with his wife Anne Marie, but always stayed in touch with Finland. The couple moved back to Finland to Mustasaari, near Vaasa, in 2006.

In 2002, Carl-Erik was diagnosed with an eye disease, which, over time, forced him to reduce his work-related activities and the frequency of his travels abroad. Even the Rorschach inkblots, which he had dedicated so much time to, ended up remaining in the background. Nonetheless, he never let go of his active lifestyle, and became a member and board member of the Confederation of Finland’s Swedish Visually Impaired until the end of last year. He actively studied braille.

In addition to his sharp intellect, his inspiring quest for professional excellence, and his willingness to constantly learn more and share his knowledge with others, Carl-Erik had many other wonderful qualities. He led an active life, competing in several marathons, and the high standards he set for himself as a professional and taught to others could also be seen in his love and extensive knowledge of good food and wine. To not go by Carl-Erik’s wine recommendation at a restaurant would always be a mistake. He was not only known as a “Rennaissance man”, but also as highly social. He loved to be around people, to have a good laugh, and he built and maintained many close and long-lasting friendships. As the late Leonard Handler wrote in wishing Carl-Erik a wonderful 75th birthday, and using the language of the Rorschach, Carl-Erik was a W+ Ma+ H COP,GHR.

He will be greatly missed.

President of The Finnish Rorschach Association 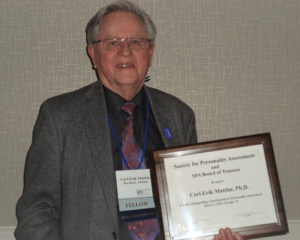 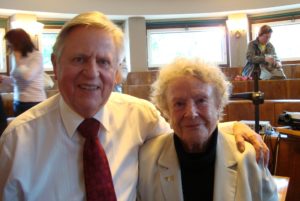 © 2019 The Rorschach, All Rights Reserved